The Advance of Model Trains

Model and miniature trains have existed for hundreds of years. When electric trains were developed over 100 years ago the hobby greatly expanded. These traditional electric trains were controlled by transformers that vary voltage to the track, a practice that remained the same throughout the century. In the early 1990’s, digital command control (DCC) was adopted as the standard for enhanced control, and remains in the hobby today. DCC involves using a controller to send commands (in the form of data packets) through the rails which are received by the locomotives through the wheels (in contact with the track). 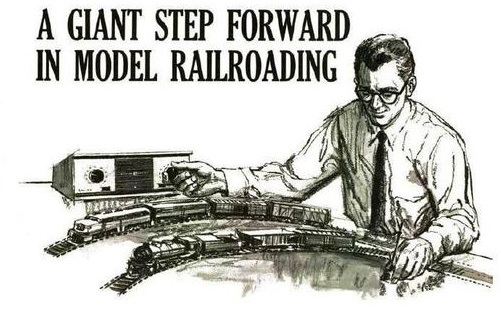 DCC requires electronic hardware (to send and receive signals) and is subject to issues related to dirty track. Shortly after the adoption of DCC, the late nineties brought large advances in personal computing, wireless connectivity and mobile devices. In the years that followed, model railroading benefited from the enhanced features of DCC, but the popularity of model railroading declined, and the hobby began searching for solutions to the limitations of DCC. In 2011 bluetooth low energy (BLE or Bluetooth Smart) was added to the bluetooth protocol as part of bluetooth4. Because BLE allows for connection to many devices simultaneously at great range with low packet loss, it is an excellent solution for model train control. In 2012 a small group of high-tech and mobile application/game developers in California saw this solution and designed a circuit board and application for train control and formed BlueRail Trains. Their background in high-tech toys, robotics, game/app and early BLE development made BlueRail well-suited to take on the challenge. (See photos of early prototypes below).

BlueRail designed and licensed the technology to Bachmann Trains (one of the world’s oldest and largest model train companies) which has now been released as the Bachmann E-Z App™ train control system. No additional equipment is required to operate these trains other than a bluetooth smart phone or tablet running a free downloadable app. BlueRail is also manufacturing plug-in boards that can plug into existing DCC-Ready trains to make them bluetooth enabled. BlueRail plans to develop games and applications that work in conjunction with model trains.

Bluetooth Smart has many features that make it highly suitable for model train control.

Range – BLE boards have been operated from 150 ft or more, and through up to 3 indoor walls. Of course no one really needs to run their train from 150 ft or several rooms away, but the fact that you can demonstrates efficient signal strength which means dependability and low latency. The technology works well with many users in close proximity without interference, and is a good solution for brass locos.

Updateable system requiring little hardware – The system depends on very little hardware. The control app is updateable software running on the user’s smartphone, while everything in the loco is handled by firmware within a bluetooth module (which can be wirelessly updated at any time). This means the protocol and entire control system can grow through wireless updates without requiring new hardware. This frees users of the cost, update issues and obsolescence of older systems, while providing more intuitive user control without the big learning curve.

Bi-directional communication – All control is bi-directional, meaning the loco can talk back to the control app. This is a strong advantage in things like consisting (cooperation between multiple locos to pull a single train) and allowing for realistic audio responses to how hard a loco is working.

Direct connection to a micro-computer (smart device) – With a direct connection between a train and any smartphone or touch device, control apps become possible on many platforms (iOS, Android, Windows, Mac etc). This also creates a platform for game and application development that works in conjunction with model trains.

The history of model trains is a wonderful example of the pairing of a traditional toy with modern technology to create a new spin on an old tradition.

Please use the video link above to see videos about various aspects of bluetooth train control.