BlueRail Trains is made up of three west coast developers with a background in high-tech and game development. 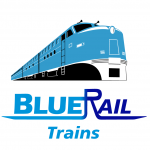 I finally had a basement space capable of supporting a decent layout, and created a double-L comprised of 200 ft of 3-Rail Atlas O track. In my haste I made the grades too steep, leading into turns that were too sharp. After my nephews crashed a few O locos, I knew I would either need to re-do my layout, or move beyond standard transformer control. In 40+ years of model trains, I had always ran standard trains. For the first time I started researching my digital control options, and learned that my options were 2 competitive proprietary versions of DCC (DCS and TMCC). The more I read, the more I realized this was a decision I would be committing to. I began reading CV variable programming manuals to acquaint myself with general DCC basics. I also borrowed and examined the Cab controller interfaces and associated hardware (for my 2 options). This decision was going to require investment and commitment to learning. As a UI designer and user experience developer in games and high tech for 20+ years, I realized this technology pre-dated a lot of modern advancements from the last 15 years, and I knew my wife wasn’t going to be excited about the money I would spend.

Around this same time, Bluetooth Smart was released, and I was fortunate enough to be doing app development for some of the first BLE smartphone controlled home lighting and backyard irrigation products. This new aspect of bluetooth supports unlimited simultaneous connections from hundreds of feet. I knew this was a great solution for my train control dilemma. I spoke with my former college roommate Pete Skeggs about making the board. He was president of the Portland robotics club, and had worked as senior embedded firmware engineer for EM Electronics and Intel. 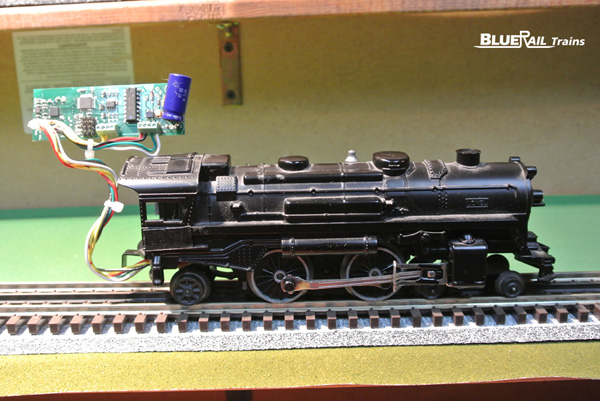 He is also the closest thing to Tony Stark this country will ever have. I also spoke with long time friend and work associate Eric Laun who is a senior UI and game design programmer with whom I had done game and tech development for many years. Pete created his own homemade bluetooth smart module and board while Eric and I developed the control app. I integrated the board into a basic Lionel steam loco within the tender. To our amazement the first board and app worked surprisingly well. We nicknamed the board “Boxcar Willy” (because it rode around in a trailing boxcar). Here is a picture of BCW v1: 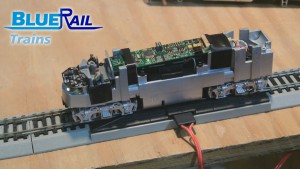 With the success of BCWv1 we set out to create a smaller board that could fit in an HO F unit connected by a DCC-Ready cable. 6 months later BCW-V2 was completed – it had a smaller footprint and was outperforming it’s predecessor.
At this stage we realized what had started out as a personal basement tech experiment was revealing itself to be a great way to run trains – one that offers some distinct new advantages. BlueRail Trains was born.

BlueRail has since partnered with Bachmann Trains and licensed this technology for use in Bachmann E-Z App™ train control. As Bachmann integrates bluetooth into their various lines, BlueRail is growing the application and feature set. BlueRail is also developing bluetooth plugin boards for use in any model train.

What’s so cool about bluetooth smart?

Bluetooth Smart has many great features that make it excellent for model train control.

Great range – We have operated our BLE boards from 150 ft or more, and through up to 3 indoor walls. Of course no one really needs to run their train from 150 ft or several rooms away, but the fact that you can demonstrates efficient signal strength which means dependability and low latency. The technology works well with many users in close proximity without interference, and is a good solution for brass locos.

Updateable system requiring little hardware – The system depends on almost zero hardware; the control app is updateable software running on your smartphone, while everything in the loco is handled by firmware within a bluetooth module (which can be wirelessly updated at any time). This means the protocol and entire control system can grow through wireless updates without requiring new hardware. This frees users of the cost, update issues and obsolescence of older systems, while providing more intuitive user control without the big learning curve.

Bi-directional communication – All control is bi-directional, meaning the loco can talk back to the control app. This is a great advantage in things like consisting, cooperation between multiple trains, and allowing for realistic audio responses to how hard a loco is working.

Direct connection to a micro-computer (smart device) – With a direct connection between a train and any smartphone or touch device, control apps become possible on the most popular platforms in the world (iOS, Android, Windows, Mac etc) using the most standard modern protocol for connectivity. This also creates a platform for game and application development that works in conjunction with model trains (which we are excited to pursue).

Grows the hobby – BLE and touch screen control makes model trains accessible to a generation of new and younger tech-savy users and creates a platform for ongoing engaging content development.

Our goal at BlueRail is to use 25 years of user-interface, game and high-tech development to bring model trains to a new level of user experience that has equal appeal for new users as well as seasoned hobbyists. We are a few creative tech developers and friends who run trains, love high-tech, enjoy what we do and want to take it further.

If you use our free downloadable app to run a bluetooth loco (Bachmann E-Z App™ or BlueRail plugin boards) and notice any features you don’t like or think are missing, you can just wait for automatic updates as we add features, sounds and capabilities. The interface for great train control can be deceptively simple while maintaining robust underlying features.

If you are a smaller scale modeler concerned about the size of circuit boards, remember tinier bluetooth solutions come out every few months. It is only a matter of time before the technology miniaturizes to your favorite gauge.

If you are heavily invested in DCC and wonder how this fits into your world, remember we are hobbyists and understand the value of all the high quality locomotives and equipment out there (like fine Stratocasters). As interested as we are in creating a new modern train control system that is expandable and avoids obsolescence, we are also very interested in adapting BLE to work with existing equipment. We have no interest in supplanting DCC, and believe BLE is a protocol that has many applications that can advance all aspects of the hobby. Our focus is to create great interfaces, and it is our hope BLE will find a way to connect our interface with whatever protocol or loco you operate.

And if you hate new technology in every form and are angry about emerging technologies, remember that technology can bring a new generation of users to the hobby. New enthusiastic users allow the hobby to flourish and grow. Model railroading has been handed down from father to son for generations. We hope BlueRail can help that continue to happen.

Please use the video link above to see videos about various aspects of bluetooth train control.